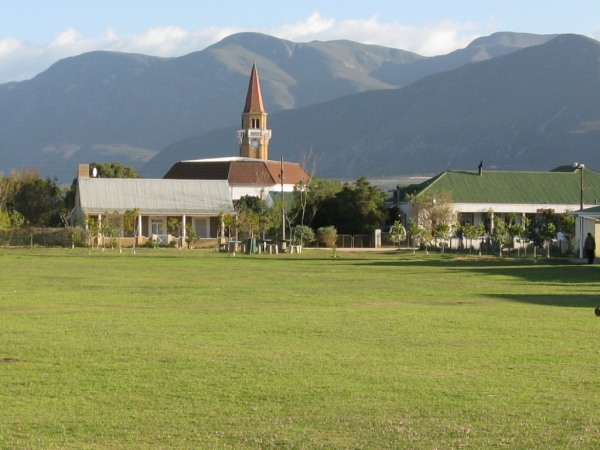 Situated in the Overberg (over the mountain from Cape Town) in South Africa, is the small village of Stanford. Established in 1857 it retains an old quiet charm. Stanford is not an ordinary village. It is a village with a river running through it.

It is a village watched over by a friendly mountain. Birds abound. Wine cellars, a micro brewery, local cheeses, restaurants (saves cooking), and antique shops. On the farms surrounding the village "fynbos" species flower through out most of the year.

15km down the road watch whales (in season) from the cliffs or from a light aircraft. Go shark diving. If you feel the pace is too much for you the beach is only 20km away.

Stanford is an ideal base from which to explore the Overberg region.

From the southern most point of Africa to beautiful hand made candles or even a casino. To witness the kilometres of rolling green wheat fields splashed with bright yellow canola flowers that seem to form waves as the wind blows across them. Take a picnic basket to a beach that disappears in the distance around a bend in the shoreline. You will definitely not want to go home.

Stanford was awarded the Best Village Destination in the South African Destination Awards in 2012. 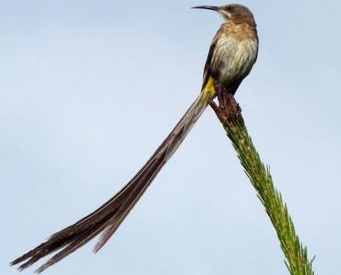 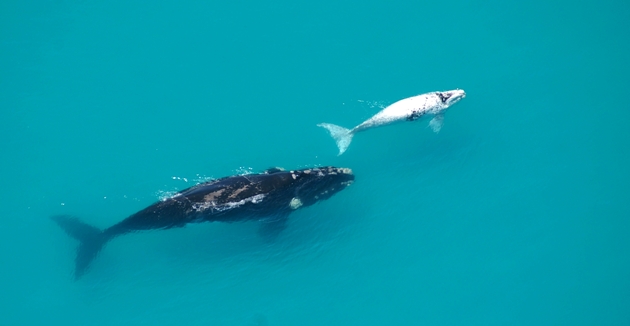 Hermanus, the best land based whale watching destination in the world, is just 20km down the road.

From July to November the Southern Right Whale (sometimes over 120 of them) frequents the waters of Walker Bay to calve and mate.

Daily flights or a whale watching boat can also be arranged. At De Kelders, 15km from Stanford, sit and enjoy a cup of coffee or tea whilst watching the whales. 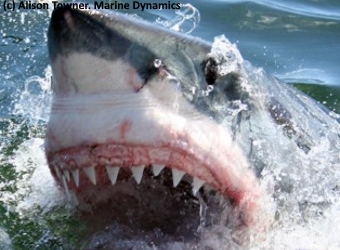 A guaranteed adrenalin rush. See the Great White Shark from up close.

Arrange to ride in the Klein River Mountain or through the "fynbos" flowers.

As this is part of a nature reserve, a permit is required for both fishing and getting there with a 4x4.

There are many other fishing areas along the Overberg shoreline. Fly fishing in fresh water dams can also be arranged. 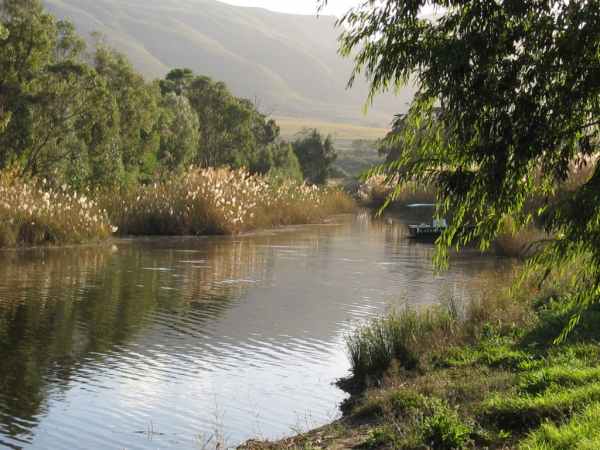 Whether you want to go on a sunset or birding cruise, have a braai (barbeque) on a boat or rent a canoe to explore on your own, it's all there.

You may be fortunate and see a Cape Clawless Otter.

A seal has also recently been spotted in the river. 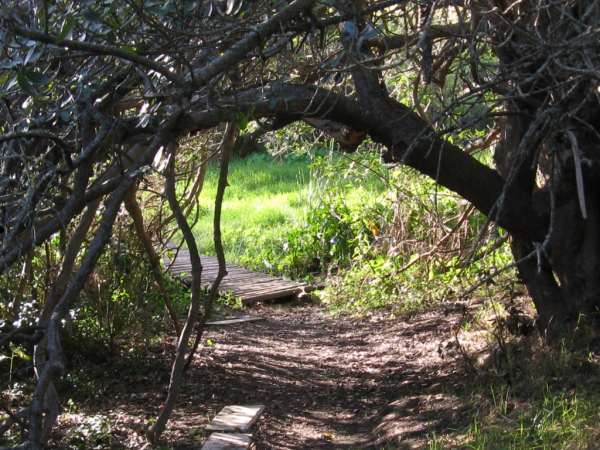 Strolling along the 3km walking trail within Stanford (along the Klein River) first thing in the morning or just before the sun sets is guaranteed to sharpen your appetite when you visit the restaurants in Stanford.

A historical walk through the centre of the village, which is a proclaimed heritage site, provides interesting information on the history, architecture and early life in Stanford.

Maps of the wandelpad and the historical walk are available at the Tourism Bureau.

Other walks can be arranged, such as a visit to the rock paintings at Phillipskop or the spectacular waterfalls (in season) at the Pig's Snout. For those just wanting a leisurely stroll (dogs allowed) on one of the farms, this can also be arranged. 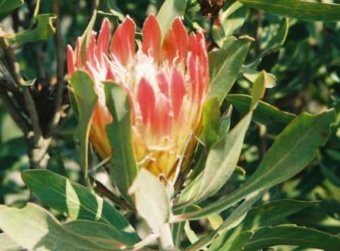 Shannonea 4x4 and Nature Trail which is just 15km east of Stanford.

At 850m above sea level you can see the southern most tip of Africa and drive through pristine mountain "fynbos". 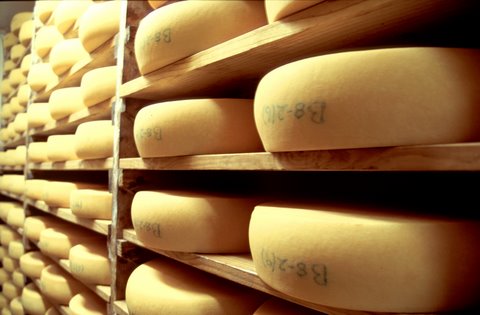 There are two award-winning cheese farms close to Stanford and well worth a visit.

Klein River Cheese hardly needs any introduction, as their award-winning cheeses can be found in all the major supermarket chains. They provide a wide variety of cheeses, but are known for their tangy Grunberg (ex Gruyere), smokey Stanford, scrumptious Raclette and many more. Definitely not to be missed. The farm is also extremely popular for their picnics and children's play area (and the farm animals, but watch out for the cheeky goat!).

Just further along the road is Stone House, which specialises in delicious soft cheeses such as brie, camembert, cheddar and 'Boerenkaas'.

Stock up with tantalising cheeses and a bottle of wine, beer or mineral water and enjoy Stanford at its best! 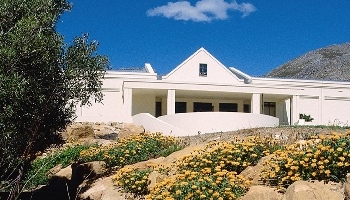 A new wine route has recently been opened to encompass the many new cellars that now operate in the Stanford Valley.

Birkenhead Brewery with a sweeping view over the mountains, brews Premium lager, Honey Blond Ale, Birkenhead Pride and Malt Stout. All with a unique taste. Come and sample their wares.

The New Junk Shop; you will need to travel far to find another antique shop carrying such a variety and quality of old "stuff". Withers & Co in the main road specialises in antique linen, silverware, and glass, as well as bespoke furniture.

The original farmhouse of Sir Robert Stanford in Church Street houses art, crafts and collectables. Also visit the Stanford Trading Store if you are looking for something different to use as décor in your home. TAT provides "something old, something new". Although there is no bank in Stanford, a number of ATM's are available.

In Stanford the culinary focus is organic, free-range, decreasing the carbon footprint, serving from (garden) fork to plate - whilst providing you with the opportunity to experience village life passing by, breathe clean air and let the eyes feast on breath-taking views.

There is such a variety of restaurants in and around Stanford that it is extremely difficult to single any one out. You are welcome to contact us directly for more information on where to eat. All we can tell you is that there is a choice from traditional Italian and British to award-winning South African cuisine ... From fine dining to free-spirited farm fair where even the resident pig may pay you a visit. And if that is not enough there is Asian, Indian... One thing is for sure, you WILL have a culinary experience of note!

If you enjoy Stanford as much as we think you will, and wish to move here like we did, visit Chas Everitt (Amanda Geldenhuys).

Napier, Bredasdorp and Cape Agulhas - about 250km return. Visit the Southern most point of Africa and en-route enjoy views of rolling hills, perhaps a sighting of our national bird, do a bit of shopping and visit the Shipwreck Museum. More... 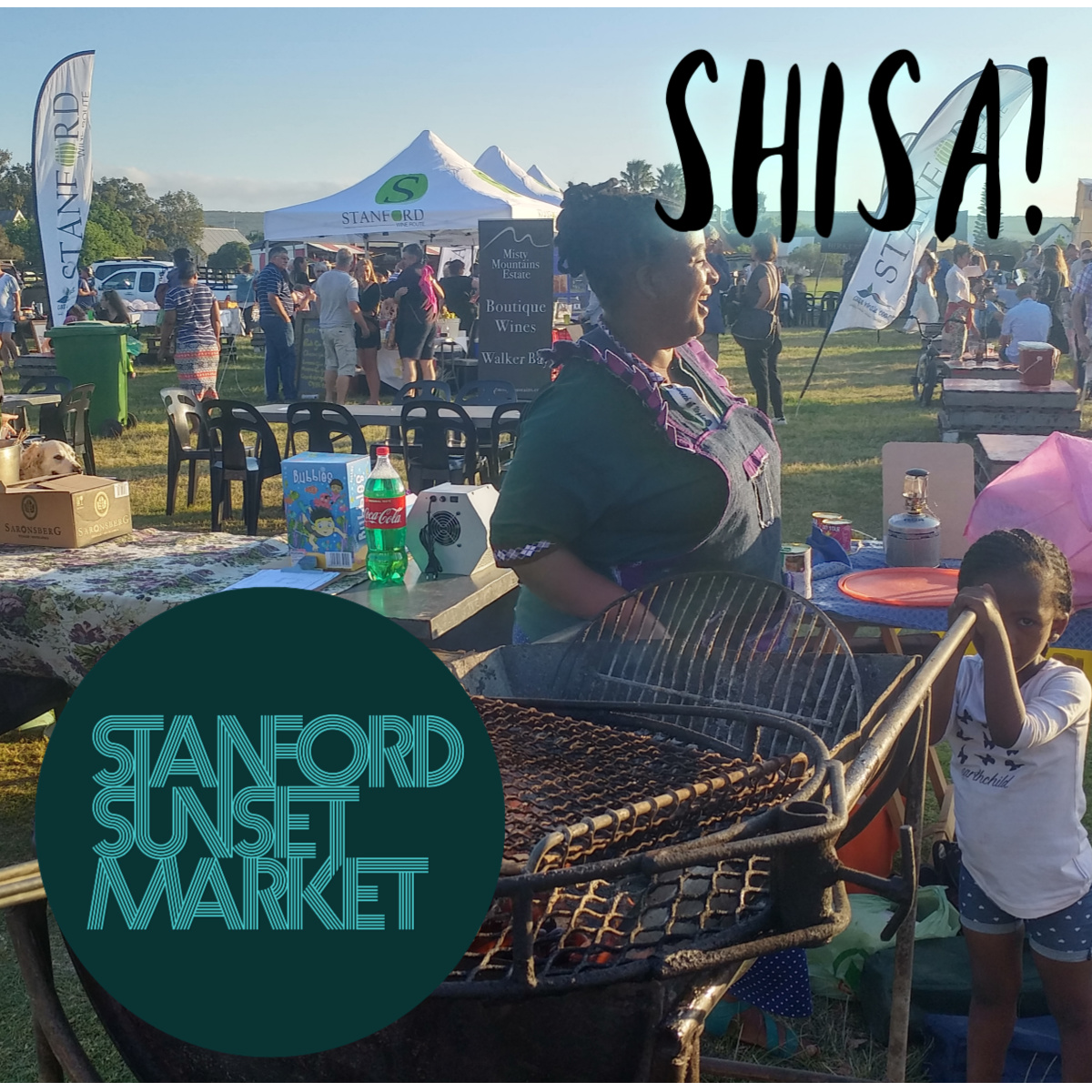 Village market - The village market is held every last Friday evening of the month (September to May) from 18:00 to 20:00 weather permitting - at the market square (follow the signs). Enjoy local food, wine and beer whilst browsing for crafts and listening to live music. 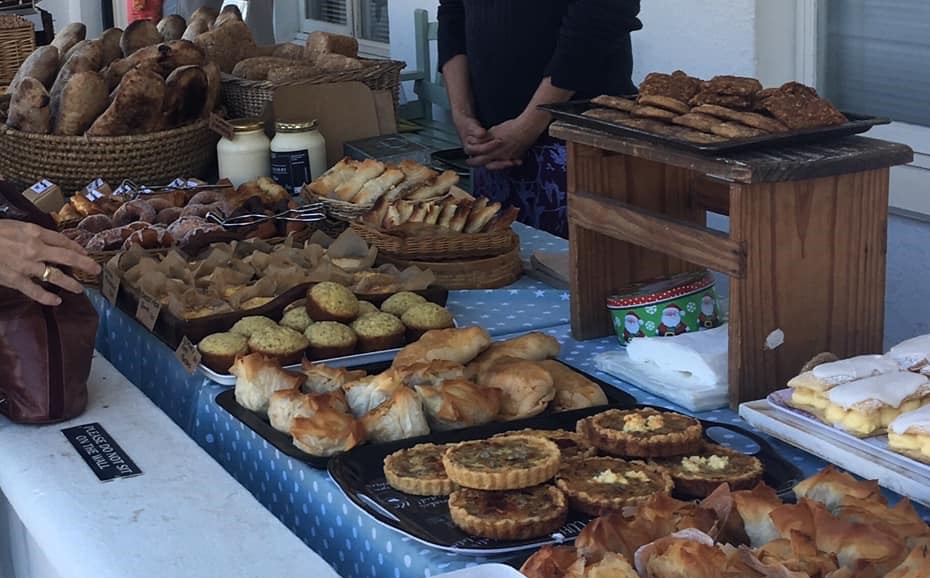 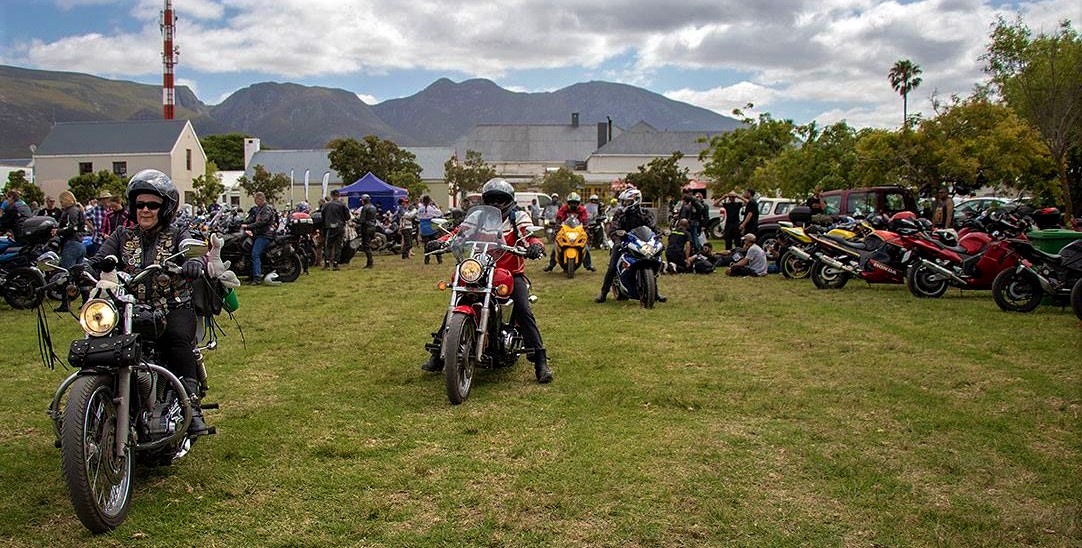 Overberg Toy Run - every last Sunday in November on the Village Green.

Stanford Culinary - every last Thursday to Sunday in May. Dine with a local, culinary workshops, long tables... NOT TO BE MISSED!

Baardskeerdersbos Art Route - Held one weekend every three months. Contact Stanford Tourism on (028) 341-0340 for details. More about Baardskeerdersbos and the art route - travel article as it appeared in Die Burger, Afrikaans newspaper.

Whale watching - July to November each year (see "things to do"). The Hermanus Whale Festival takes place annually, during the last week of September.

The old village of Stanford is a proclaimed heritage site in terms of the South African Heritage Resources Act. Strict building rules apply to maintain the architectural heritage of the village.

Robert Stanford was born in 1806 in the Irish village of Ballina in county Mayo. At the age of 32 he resigned his commission from the British Army and retired on half-pay. He and his wife emigrated to the Cape Colony and purchased the farm Kleine Rivier's Valley the present site of the village of Stanford.

Robert Stanford was a progressive farmer so much so that instead of transporting his produce over the mountain by ox wagon he purchased a small ship a sailed to Cape Town from a cove 12 miles from his farm. Apart from Kleine Rivier's Valley he purchased seven other farms in the Colony.

In 1849 the British Government decided to send 300 Irish "convicts" to the Cape. The Colonists resolved that if the "convicts" were to arrive, the Government or anyone associated with them would not be supplied with provisions or services. In this way they hoped to force the Government to send the "convicts" to Australia. The convict ship Neptune did arrive and the resolution was brought into force. So effective was the blockade that the Governor approached Robert Stanford, who was still in the employ of Her Majesty, to supply the government with provisions. If he refused a state of martial law would be declared and the supplies taken by force. Realising that people could be killed he agreed to supply the provisions.

The Neptune sailed away with the "convicts" but the people of the colony blamed Stanford for going against the resolution of the whole community and he was completely ostracized. His children were barred from going to school and even when his youngest daughter fell ill the doctor refused to attend to her resulting in her death. His exclusion from the community was complete.

He sailed to England to ask for compensation for his losses and was knighted and paid 5 000 pounds. On returning to the Cape he found that his farms had been stripped and through devious means many of them sold. His future in the Cape was bleak and he went back to England where he died a virtual pauper at the age of 70.

Phillippus de Bruyn bought the Kleine Rivier's Valley farm from Stanford at an auction. On 30 September 1857 he sold the first plot of the new village he decided to call Stanford.

Get Active - There is a lovely historical walk that will give you background on the houses (and their past residents). Booklets are available from Stanford Tourism or get it here.